KIRO 7's article on March 12th was the first news mention I saw of this project from Seattle and King County. Yesterday, MyNorthwest picked up the story too, as the project draws closer to constructing the tunnel, however, this kind of project takes many years to get going on the ground. Design began in 2019 according to the schedule on the project website, but project planning started at least as early as 2017 when Seattle Public Utilities began onboarding the consultants to help manage and oversee the $570M project, according to the Seattle Daily Journal of Commerce article from August 2017. 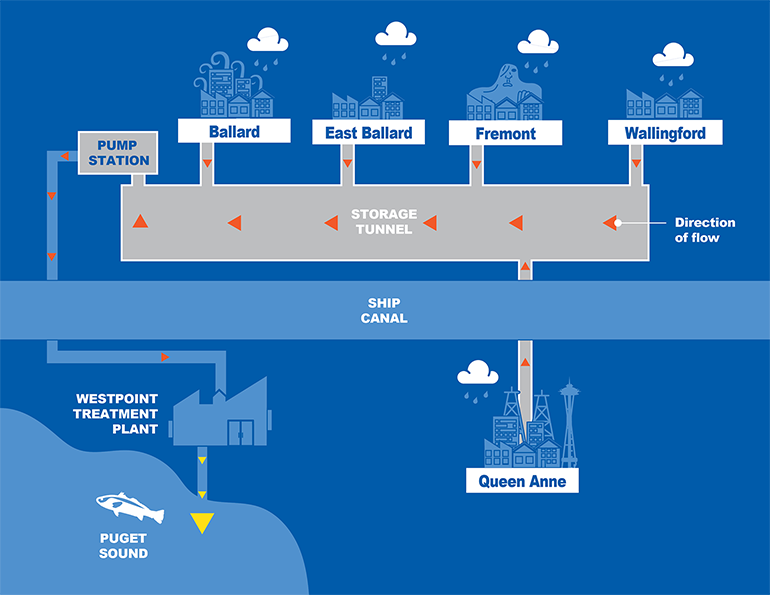 The Seattle Daily Journal of Commerce noted that the new stormwater tunnel would be constructed in order for Seattle and King County to comply with a Federal mandate to reduce the number of CSO events to an average of one over the span of 20 years. At that time, they averaged 130 CSO events per year. The County expects to complete 14 CSO control projects by 2030 to complete its Protecting Our Waters program, King County's effort to reduce CSOs and comply with the consent decree.

In 2013 King County signed an agreement with the U.S. Department of Justice and the Environmental Protection Agency (EPA). This agreement, called a “consent decree,” requires King County to complete its CSO control plan by 2030. Download and read the consent decree agreement.

The Ship Canal Water Quality Project will bore a 2.7 mile long tunnel from Ballard to Wallingford. Its' purpose is to store combined sewer overflows (a mixture of mostly stormwater with some wastewater), which currently outfall to Lake Union, Salmon Bay, and Ship Canal (ultimately flowing to Puget Sound) during large storms via the West Point Treatment Plant. This new tunnel will prevent the discharge of up to 75 million gallons of  CSO overflows on average per year.

According to the Seattle Public Utilities web page on the project:

In 2018, 84% of the city's overflows came from the combined sewers in Crown Hill, Ballard, Fremont, Wallingford, Queen Anne, Downtown and Capitol Hill. During a heavy storm, the new tunnel will capture and temporarily store more than 29 million gallons of untreated stormwater and sewage until the treatment plant is ready for it.

Construction began in 2020 with the tunnel boring planned to begin in late spring this year. According to the consent decree, the project must be operational by 2025. The tunnel boring machine (TBM) was imported from Germany and arrived at the Port of Tacoma in January 2021. The TBM weighs 450 tons, travels 58 feet per day, and is currently being assembled in Ballard. Neighborhoods impacted by construction include Ballard, Fremont, Queen Anne, and Wallingford. Each neighborhood has a section on the project website explaining the current construction stage and impacts to the area such as road closures and detours. The map below shows the tunnel alignment and various project sites to house additional infrastructure to support its operation.

From March 24th to March 31st, while you are waiting to be eligible for the COVID vaccine, you can vote for your favorite tunnel boring machine name! Below are the five names that made it to the voting slip. My personal favorite is Daphne! 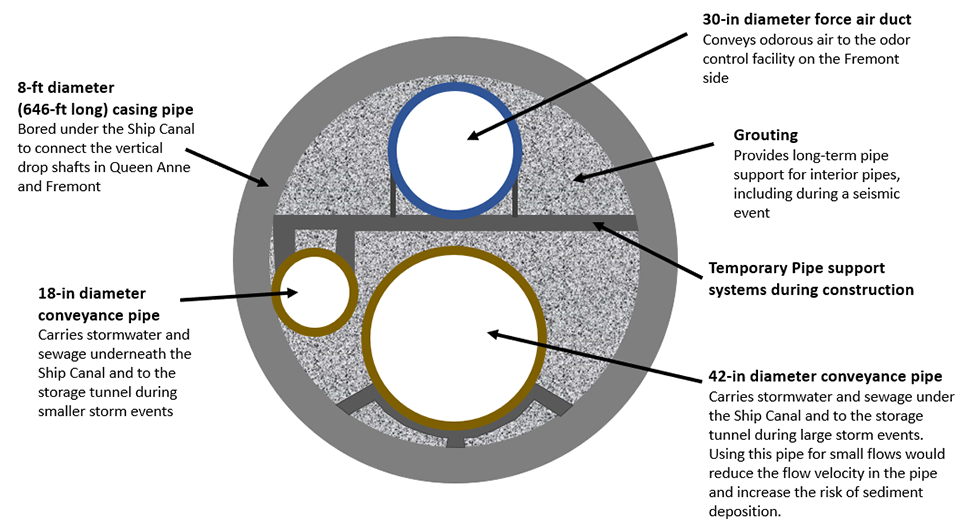 About one year from this month, the Department of Ecology's (DOE) National Pollutant Discharge Elimination System (NPDES) Municipal Stor...